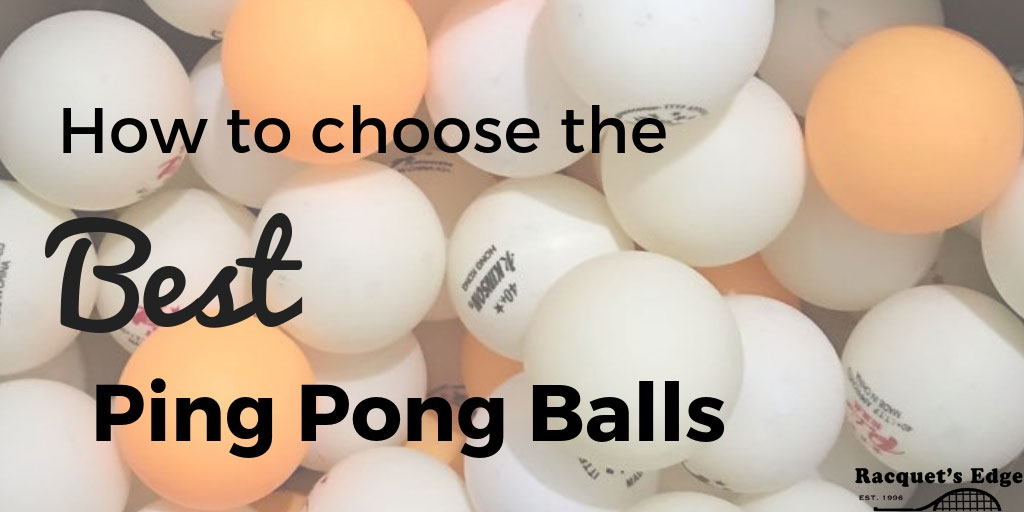 Oh, balls! Which ping pong balls should I choose? If you’ve found this page, chances are this is what you’re trying to figure out right now. Stick with us because we’ve got you covered: find out all about the different types of ping pong ball and how to pick the best balls for your table tennis game. Let’s jump into it.

What is a ping pong ball?

A ping pong ball is a lightweight, hollow plastic ball used in the sport of table tennis.

More than learning the dictionary definition of a table tennis ball, you need to understand what they’re made of, how they’re designed and the official regulations governing their use.

Funnily enough, players often spend a lot of time (and way more money) choosing the right ping pong paddle, but completely overlook getting the right balls. Playing with cheap table tennis balls is fine if you’re just messing around, but if you’re interested in improving your game then you’ll need the right balls for the job.

What are the official ping pong ball regulations?

All table tennis balls, as defined by the International Table Tennis Federation (ITTF) handbook (https://www.ittf.com/handbook/), are subject to 5 regulations:

Most of the balls you find on the market will be this standard tournament size, but you’ll also find 38mm (1.5 inch) balls for sale, like these Franklin Sports 38mm table tennis balls.

38mm ping pong balls are faster and provide more spin than 40mm balls. The 40mm only became the standard after the 2000 Sydney Olympics, and some players still prefer 38mm balls.

If you’re playing with friends or recreationally, try both 38mm and 40mm balls and see which you prefer.

ITTF-approved table tennis balls must weigh 2.7g. But there’s an accepted tolerance of between 2.67 and 2.77g.

Lighter ping pong balls are slower and more likely to wobble, whereas heavier balls are faster and more stable in their trajectory.

If you’re a beginner, go for the heaviest ping pong balls you can find that is as close to 2.77g as possible. For example, these KEVENZ balls weight 2.75g.

Table tennis balls can only be white or orange.

It’s thought that these colors have the greatest contrast with most backgrounds, making the ball easier to spot during play.

Some players choose to use orange balls during training and then switch to white balls during tournaments, but there’s no rule about this. You can use white or orange balls at any time. But there’s one more rule to take note of: before an official tournament, you and your opponent must agree on which balls to use, and the ball must be sufficiently different in color to your clothing:

The main colour of a shirt, skirt or shorts, other than sleeves and collar of a shirt shall be clearly different from that of the ball in use

Showing up to a table tennis match wearing fluorescent orange and wanting to play with orange balls isn’t going to be a successful strategy!

White balls are usually used during televised tournaments because they provide better contrast for viewers.

At the end of the day, color won’t affect the performance of any ping pong ball, but having color contrast with the background of the room you’re playing in and the clothing of your opponent will help you spot the ball and react quicker.

Quick answer: what color ping pong balls shall I buy?

Pick balls that contrast with your environment. If you play ping pong in a room with white walls or flooring, choose orange balls. If you play in darker areas, go for white ping pong balls.

What’s inside a ping pong ball?

Surprisingly, there’s nothing inside a table tennis ball aside from normal air. There’s a misconception that each ball must be filled with flammable gas because they burn so wildly, but it’s actually the flammable celluloid plastic that causes ping pong balls to catch fire.

What’s a ping pong ball made from?

Short answer: table tennis balls are made from plastic.

But there are many different types of plastic, and ping pong ball construction has changed significantly in the last few years. Let’s break it down…

Table tennis balls have traditionally been made from celluloid, a type of transparent flammable plastic made in sheets from camphor and nitrocellulose. Yes, it’s the same type of plastic used in old 35mm film. In 2014, the ITTF expanded their range of accepted materials to include other plastics, and gave manufacturers freedom to innovate and develop new table tennis balls.

Officially, both celluloid and non-celluloid ping pong balls are allowed by the ITTF, but celluloid balls are expected to decline in popularity because they are more expensive to produce and cause problems for manufacturers (like being extremely flammable, for example!).

So what does this all mean for you as a player trying to buy the best balls? It means you have a lot of choice. There are a couple of differences between celluloid and non-celluloid ping pong balls; crucially newer plastic balls can be made with a seam or completely seamless. 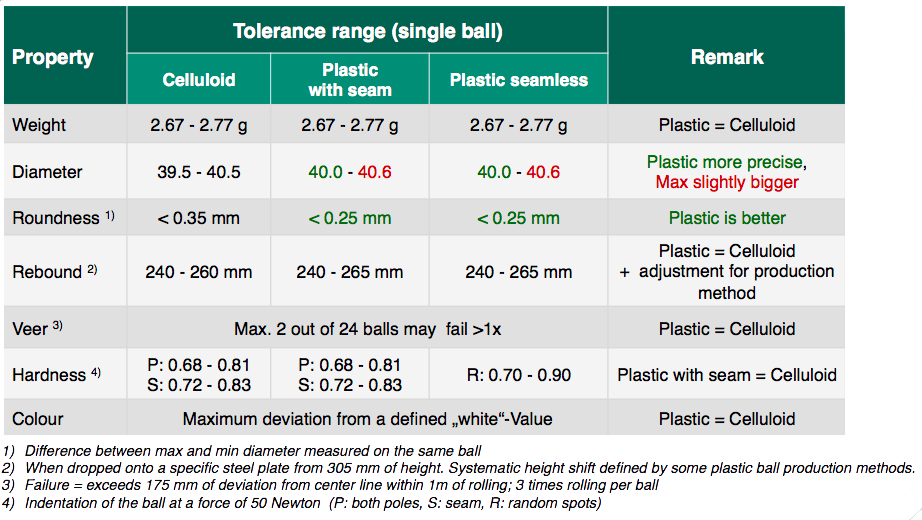 Let your playing style inform your choices. The best way to figure out if you prefer celluloid or plastic ping pong balls is to try both.

It’s getting harder and harder to find celluloid table tennis balls on the market, but there are still some premium manufacturers like Japanese specialist Nittaku making them.

Tip: celluloid balls are marked with a “40”. 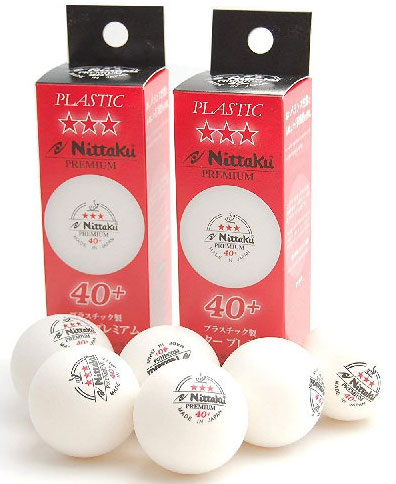 As we briefly touched on above, the newer plastic table tennis balls can be manufactured with or without a seam, whereas celluloid ping pong balls must have a seam.

What is the difference between seamless and seamed table tennis balls?

There a few differences between seamed and seamless ping pong balls: seamless balls are more durable because they don’t have a weak point at the seam. Seamless balls are hard to find, but some players believe they offer a similar playing experience to cellulose balls.

Here are some of the potential benefits you can expect from a seamless table tennis ball, according to Baal from TableTennisDaily:

Among the plastic balls, the XuShaoFa (XSF) ITTF approved ball is clearly a superior product…. I would actually say vastly superior. This is because unlike all of the Chinese seamed balls, the bounce is as high as celluloid. They provide a consistent playing quality. Their roundness is also superior. And there is absolutely no comparison regarding durability, the XSF balls last much longer than any other plastic ball. 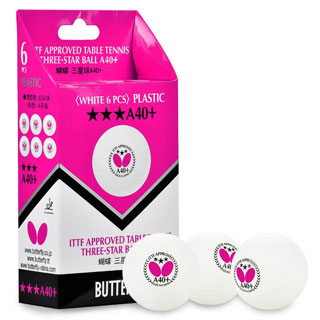 Seamed table tennis balls can be made from celluloid or plastic. Many of the cheaper balls you’ll find online are plastic balls.

Case in point: for the last 3 years, seamed plastic balls have been the official balls of the World Table Tennis Championships (Butterfly’s balls [see above] in 2018 and 2019, and NITTAKU Premium 40+ balls in 2017).

You might be wondering what the stars mean on ping pong balls. It’s simple: stars indicate quality. 3 stars is the maximum rating, representing the highest quality balls. 1-star or no-star table tennis balls will be of lower quality.

As long as the balls match the required regulations (size, weight etc), the star rating does not matter when it comes to using balls in a tournament. It all comes down to durability: 1-star and 2-star ping pong balls tend to be less durable than 3-star balls and are better suited to training or casual games.

However, manufacturers set their own star-rating guidelines and there are still plenty of cheap 3-star table tennis balls on the market (like this pack of 50 KEVENZ 3-star balls) that are not as superior as other options (like these seamless 3-star ping pong balls from XuShoaFa). Even in the 3-star ball market, there’s plenty of variation in quality and more often than not you get what you pay for so take the brand reputation into account when making a decision. If a brand only sells 3-star ping pong balls, there’s no way to compare them to any other ball.

Are there 4 or 5 star ping pong balls?

There is no such thing as a 4 or 5 star ping pong ball. The maximum quality rating is 3 stars. However, since star ratings are awarded by manufacturers themselves and there is unified standard, there’s nothing stopping someone calling their balls “4-star” or “5-star”.

Most of the best table tennis brands are from China and Japan, as the sport and subsequent industry is huge there. Here are the top brands, many of which we’ve already touched on earlier:

In 2021, the official list includes 112 different balls: here is a selection that you can easily find for sale online today:

You now know all you need to know about ping pong balls. It might seem surprisingly complicated, given the volume of options on the market, but, ultimately, there are only a few decisions to be made: orange or white, plastic or celluloid, seamed or seamless. Try them all and you’ll have found a new favorite in no time.

Also looking for a new table tennis racket? Read our guide to the best ping pong paddles in 2021.