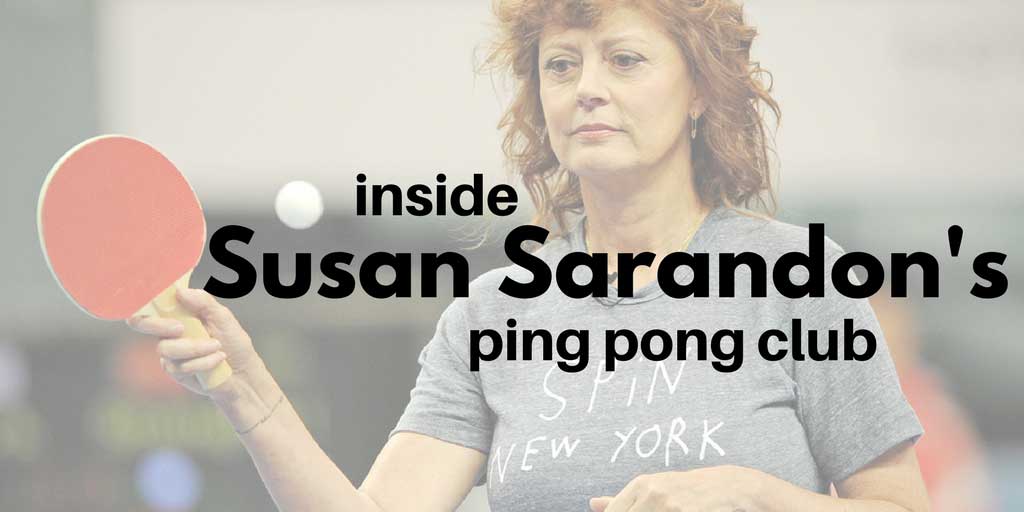 If you’ve seen the 2014 film Ping Pong Summer, co-starring Susan Sarandon, then you’ll know the actress can handle a paddle. But did you know that she also co-founded a chain of ping pong clubs in 2009?

It’s called SPiN, a cross between a ping pong hall and a social club. The first club opened in New York in 2009 and there are now branches elsewhere in North America – San Francisco, Chicago, Toronto and more. The venues couldn’t be further from a sports club – they have booths, a full bar and a dance floor.

Sure, there are plenty of ping pong tables too, but you’re just as likely to go to SPiN for a drink or bite to eat. The menu is simple: flatbread pizzas, salads and sliders. For table tennis enthusiasts, there’s also the signature “Backspin” cocktail, comprising of Monkey Shoulder Scotch, Coffee Infused El Dorado Rum, Ramazzotti, Giffard Banana, Velvet Falernum and Luxardo Maraschino.

If you want to actually play ping pong, you can reserve a table in advance, or pay walk-in prices subject to availability. SPiN comes across as a hipster bowling alley, with prices starting at $19 for 30 mins at the table. There are organized leagues, too, with a mandatory mixed gender clause ensuring there’s at least 1 female member of each team. Solo ping pong fans can join on their own and get matched up with a team. It’s one part ping pong, one part social club, but definitely targeted to the 20-something demographic. There’s even a bathtub full of ping pong balls for selfie opportunities (with prizes awarded for the best each #TubTuesday).

This week’s #Tubtuesday winner is @abbeylinn for her classic approach to tubbing! ???????? Come back any weekend for your free hour of ping pong! #WEARESPiN

So how did Susan Sarandon come to start a chain of hip ping pong social clubs?

It all started when the actor met Franck Raharinosy. Franck calls himself the ‘Prince Madagascar’, due to some way his family tree dates back, but with nothing tangible to come from it today. A ping pong player and enthusiast, Franck and his friends started holding ‘Naked Ping Pong’ tournaments (allegedly with no actual nudity), and began attracting attention from pro players and sponsors. In April 2008, Susan Sarandon went to one of Franck’s parties and ended up hiring his team to make a birthday tribute video for her then partner Tim Robbins’ 50th birthday. Incidentally, Sarandon and Robbins parted ways shortly afterwards, and she began dating one of Franck’s team – Jonathan Bricklin. Sarandon became an investor and co-founder of SPiN the following year.

“I love the whole idea that it crosses all gender and age barriers… you can have little girls beating muscley 35-year-old men. And you can play it until you die. We have members that are really, really good that are in their 80s, and little tiny seven-year-olds that come in and kill everybody. It’s one of the few sports I can think of where girls and boys and men and women are on the same plane. We have a tournament every Friday between the top club players, and it’s been won three times by a woman now. They play for money, so they play really hard. I love that about it, and I love the fact that you can’t get hurt. I love the fact that it’s fast, and fun.

If that’s not enough to make you pick up a ping pong paddle, I don’t know what is.